In a back courtyard of Ateliers ’89, an irregular makeshift structure built from scrap metal and broken objects has been gradually taking shape over the past two weeks. The coop-like enclosure is the work of Curaçao’s Travis Geertruida, who plans to disassemble and move the unwieldy object into Ateliers ’89’s gallery space for the upcoming Caribbean Linked IV residency exhibition.

Geertruida is relatively new to the art world, or at least new to making work outside of the context of the school-based collaborations he has undertaken as a student at Curaçao’s Instituto Buena Bista (IBB). During his time at IBB, he’s had the opportunity to work with an international set of visiting artists on projects that have introduced him to the possibilities of performance, public art and various aspects of critical theory. For the subject matter of his developing independent work, Geertruida seems to gravitate towards issues surrounding external pressures on individual identity, sometimes welcomed and other times resisted. 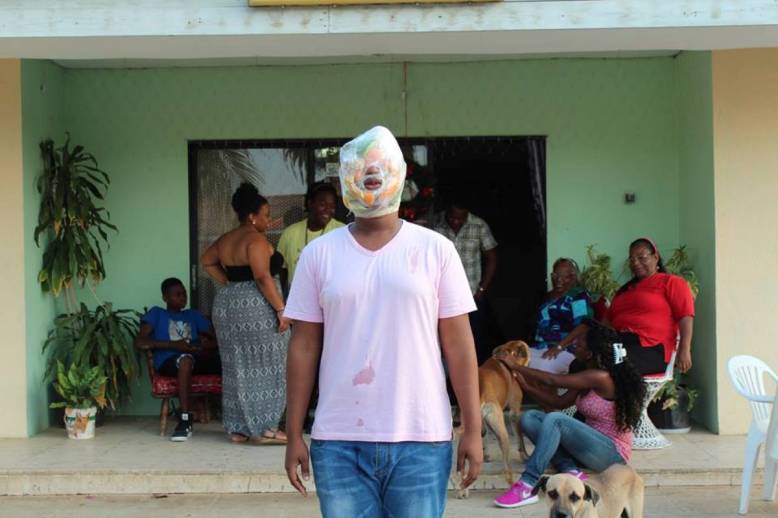 For instance, in one of his earliest works, titled Family Feud, Geertruida made self-portraits that he then altered based on feedback from members of his large and tight-knit extended family. This work culminated in a video and performance in which Geertruida wore a mask made from seran wrap and food items as a kind of objection to being overly determined by the perceptions of others within the social microcosm of a family gathering.

At one point in the video piece made for Family Feud, Geertruida is seen alone in his bedroom, a private space apparently free from these concerns. But the sense of security does not last; through a jittery series of cuts, furniture is depicted moving wildly around the room to a foreboding rumbling sound. The rupture of the space coincides with Geertruida’s self-masking in preparation for interaction with the social world beyond. 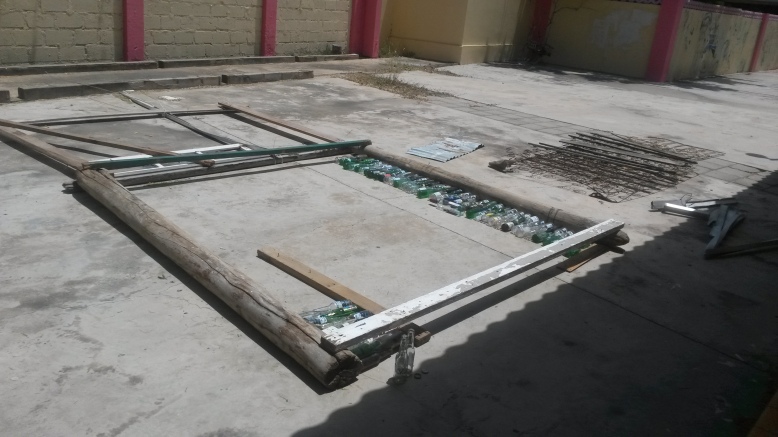 Work in progress by Travis Geertruida.

During his Caribbean Linked residency, Geertruida has undertaken the task of building a different kind of sovereign space for himself. He is doing so from discarded objects collected around Aruba; at a junkyard, at the beach, from the streets of a distressed section of Oranjestad. These objects include mattress springs, car parts, a window frame from a vernacular cottage, rusted chain, pieces of aluminum, bricks he is forging from sand and empty beer bottles, among other things. Geertruida says the form of the work, which he plans to inhabit during the exhibition’s opening, is less important to him than the concept of self-enclosure that motivated its creation.

Geertruida’s attitude towards that motivation is more ambiguous than it first appears. Although his interest in the barriers people erect to carve out their own sanctuaries is clear, he also mentions being increasingly aware of a related “disconnect” between Caribbean societies, one with historical and geographic roots. That disconnect, which masks similarities and solidarities, has also lead Geertruida to reflect on barriers and the instinct to claim territory.

The process by which Geertruida has been making his latest work was suggested to him early in the Caribbean Linked residency program during a tour of the Rancho district of Oranjestad. There, preservationists and groups attempting to revitalize the historic neighborhood are engaged in efforts to remove illegal dumping sites and housing extensions. Small camp-sites constructed by squatters, resembling the one Geertruida is building, are among the structures that are frequently being torn down in the name of beautification and the preservation of monuments.

The cyclical nature of that process spoke to Geertruida, as did its social implications. He also appreciated the irony that preservationists would find themselves devoted to a struggle against the organic growth of domiciles out of accessible but sometimes discordant materials, a process so integral to the Caribbean’s historical development.

At this stage in the Caribbean Linked IV residence, Geertruida’s shanty remains unfinished and removed from the context from which it will eventually be displayed. I cannot yet express a visual response to it. What is evident is that the Geertruida is attempting to make connections between a number of compelling concepts, some of which he has formed out of impressions of his time in Aruba, others carried over from previous fixations. That range of ideas is matched by the sheer multiplicity of the mangled, forsaken materials that began collecting outside his studio upon his arrival at Ateliers ‘89.