Whenever I spoke with Puerto Rican artist Frances Gallardo about her interest in the meteorological, there was a degree of familiarity. Of the countries and territories from which Caribbean Linked IV’s residents had travelled, Puerto Rico is my closest island neighbor. So if weather events have any influence on identity and society, Gallardo and I shared some reference points. The same hurricanes – a frequent subject of the artist’s work – had shaped our earliest childhood memories. The same polvo de Sahara (Sahara Dust) that becomes a topic of discussion on my island each year when it blankets us in thick haze was the subject of an entrancingly original series of works Gallardo produced in 2015.

A lot of what Gallardo introduces in the way of an aesthetic experience of these things has to do with scale and perspective. The standard human experience of a hurricane, for multiple reasons, prevents our awareness of the intricate patterns and movements innate to the storm as a system. Likewise, our experience of a trans-Atlantic dust cloud does not typically suggest beauty unless we think of each particle as a unique object, something to be revealed, as Gallardo did, under a microscopic lens. Extreme distance and extreme closeness appear as opposites only in relation to the limitations under which we perceive these phenomena.

An abandonment of the ordinary human perspective can create the impression of an aloof or dispassionate artistic practice. In Gallardo’s case I would suggest that a better description is nomadic. Since moving to New York in 2009, her work has developed in a back-and-forth context between the U.S. mainland and Puerto Rico. This is when, she says, she began to feel intensely the experience of seeing her home island from an aerial perspective; from jet planes, from satellites used in weather reports. Many of the intricately cut paper hurricane collages she made from 2011 to 2013 were produced using images from the U.S. National Oceanic and Atmospheric Administration archives.

Having just recently completed her MFA at Cornell University, Gallardo arrived at Caribbean Linked IV with a well-defined process and a lucid way of speaking about her themes and interests. She also arrived with a desire to depart from the high-stress, rigidly-structured way of making work demanded by a degree program. During my first visits with Gallardo at her Ateliers ’89 studio space, she spoke of wanting the works she produced in Aruba to develop naturally out of free experimentation with materials, and abstention from any overwhelming or heavy-handed focus on theory.

Gallardo settled on drawing as the art form that would be central to her Caribbean Linked works. This was drawing of the automatic, unconstrained kind in which the forms on paper revealed themselves through a process of accumulation and repetition. The building blocks of these forms were oval shapes of varying sizes, resembling fish scales or the patterns found in dead coral. But more relevant to environmental context was the process itself, which produced island-like forms with an eroded, often unfinished appearance. It was in the exhibition space during the installation process that Gallardo begin to piece together these drawings to map unexpected linkages and associations, a process that mirrored much of what had occurred at the personal level among Caribbean Linked IV’s residents over the previous three weeks.

Gallardo’s process also served as a continuation of her survey of meteorological forces. The most extraordinary thing about Aruba, she told me, was the constancy of the wind, the continual force with which it shapes and re-shapes surfaces. Gallardo’s drawing technique at Ateliers ’89 was meant to be an embodiment of the wind; her marks were unceasing and spontaneous, varying in intensity as each new form emerged. The action of giving shape in each case was potentially infinite. 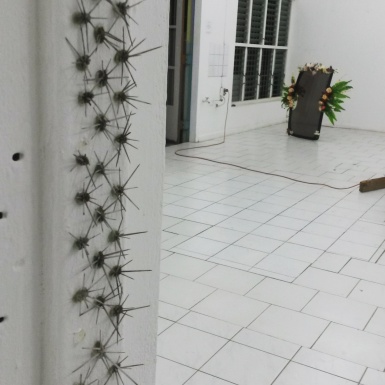 Near her drawings, Gallardo also introduced into the gallery space a constellation of thorns she cut from cacti, the life-form that appears to thrive the most amidst the challenges of Aruba’s climate and geography. These prickly, symmetrical clusters, which recalled for her miniatures of Puerto Rico’s famous vejigante masks, she glued on the inside of a door-frame in the exhibition space, encouraging those passing through to experience them as both aesthetic objects and a potentially harmful barrier. The thorns’ ability to cause injury was rearticulated by Gallardo’s placement of a collection of balloons in a cage above the doorframe, in perpetually tense dialogue with the fragments of cacti. As in Gallardo’s previous work, particularly her hurricane series, the viewer’s aesthetic experience owes something to an intimation of destruction, made dormant but never wholly removed by a change in perspective. 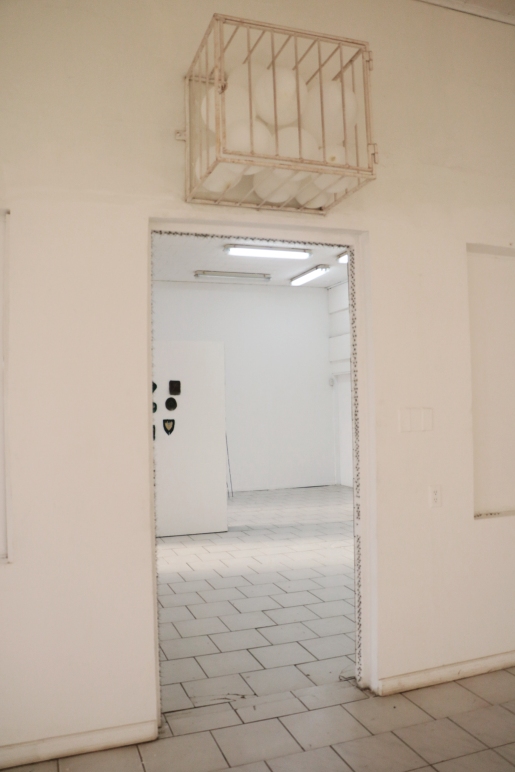