Charlie Godet Thomas, whose residency at Caribbean Linked IV is supported by the Bermuda Arts Council, creates works that often refer to states of latency and concealment, things that are overlooked, unnoticed or purposefully unstated. Thomas says that when, for a 2013 work titled Evil Knievel Died of Natural Causes, he displayed a plastic grocery bag of cast-rubber lemons on a wooden bench, he got the response he was looking for when some exhibition-goers sat down on the bench as if it wasn’t part of an art piece.

An interest in the ignored, omitted and imperceptible pairs well with Thomas’ writerly tendencies (he says he reads more fiction and poetry than he looks at visual art). The process of hammering out meaning from the raw material of language is almost never as straightforward a process as we imagine it to be. Thomas’ text and language-based work, which has taken multiple forms including video and vinyl lettering, is, to me, his most appealing.

Much of the process behind these works — such as Questions, Statements, Proposals and I’m Hydrofloating — lies in altering slightly the presentation of existing text in a way that reveals meanings masked or evaded in its previous context. The former mentioned work involved the creation of a three stanza poem on a gallery wall out of language appropriated from signs and advertisements along a single road in South London. Pay as you go. Escape to a sparkling moment. The latter work took the form of an abrasive catalogue of promises made by over-the-counter medications relayed by a recording of Thomas’s voice over flashing strobe-like text in an enclosed space. It’s Ideal for restless nights when total switch-off is needed. 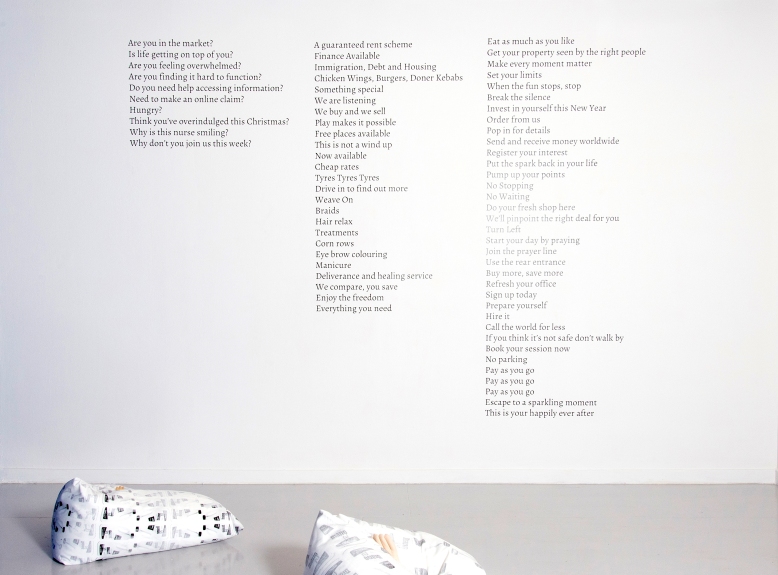 The condition of being enmeshed in a fatiguing web of consumerist language does not occupy as prominent a place in the hierarchy of concerns generally attributed to “Caribbean art” as it does in art associated with more obviously media-saturated societies. The exception of course is the queasy language of tourism. So it isn’t surprising that Thomas’ decision to continue exploring “language that talks about things without really talking about them” here at Caribbean Linked IV guided him towards compiling a list of words and phrases encountered in both Bermudian and Aruban tourism advertising. When I last spoke to Thomas about this process, he had begun organizing the text in a way that accentuated the anxieties produced by accumulation and repetition. The inauthenticity of the language piles up. The historical associations of repeated works like “discovery” are inescapable. 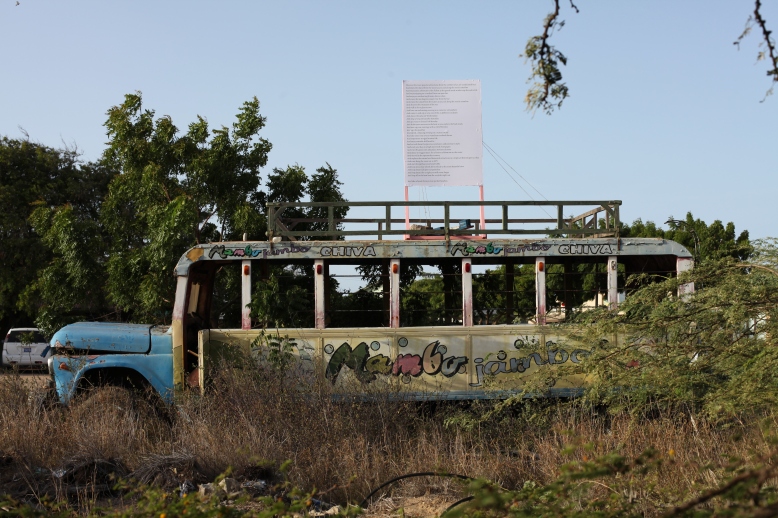 Documentation of Enjoy the Trade Winds from the Comfort of an Air-conditioned Bus, 2016
Image Courtesy of Atelier ’89 and VITRINE, London / Basel

This text based work is still developing. Closer to completed is another work Thomas will also be displaying at the Caribbean Linked IV exhibition at Ateliers ’89. Inside the gallery space, he has already removed the glass window slats on one side of the room and replaced them with boards adorned with a segmented photograph of a shattered window seen in the town of San Nicolas. A further fracturing of a fracture. The way the sky’s reflection is fragmented both by cracks in the photographed window and the way the work is displayed connects provisionally to ideas in the text-based work about the multiple fissures that can run through what we take to be transparent.

In his address to tourism, Thomas is closer to direct comment on the context in which his work is being made than is usual for his practice. As a London-born and based artist whose connection to Bermuda is diasporic, one of the values of Thomas’ presence at Caribbean Linked has been that it may challenge many of us to expand our ideas about what sort of work we include when we imagine a Caribbean canon. That is, if it is important to imagine such a canon at all. Despite frequent engagement with Bermuda’s contemporary art scene, Thomas’ work is generally not about his relationship with Bermuda as a place, whether connected or estranged. In places where our understandings of art history are so connected to inquiries about identity, we might ask ourselves: how do we situate practices that decline the question?