Dutch/Aruban artist Robin de Vogel shares her experience during Caribbean Linked II, a residency programme at Ateliers ’89, Aruba. She describes her need to appropriate and settle into a studio space, accumulating ‘objets trouvés’ as a part of her creative process. As she carved out this space for herself, she also discovered where she fit in the environments constructed by her fellow resident artists. Through their time together she noticed the closing of a gap between the Caribbean islands, building “a bridge where only creative-exchange is accepted as toll fare.”

After the first breakfast with all of us at the table, eating while debating politics and manners of campaigning in the Caribbean, I walked through the blue and yellow halls of the Ateliers in pursuit of a good spot to start working. Sofia had set up shop in the far left corner of the first room, one of the larger and lighter spaces in the building. With some of the space already being semi occupied, I moved some tables around to figure out where I’d want to put down roots for the coming two weeks of our residency. I strategically placed myself facing away from the doorway, as I know myself to be continuously curious and therefore easily distracted by everything around me.

About two months ago, two weeks prior to my graduation show, the time had come to clean up the studio space I had inhabited for the past year. I felt like a snail without its shell after everything was moved around, cleaned up, thrown out or saved by taking it home. All the different materials I’d managed to accumulate during the semester to “one day” be of use and my ever-growing collage on the wall. Pictures, postcards, newspaper clippings, objets trouvés, souvenirs and film stills. 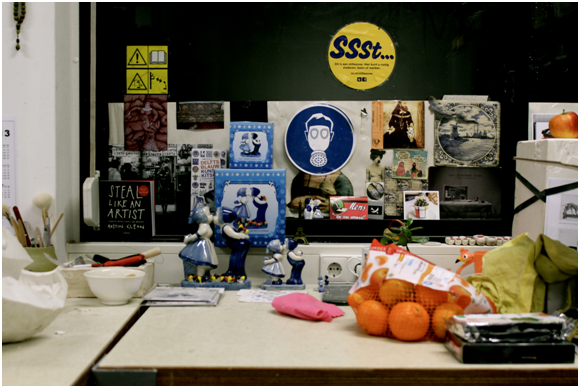 They function as tangible trains of thought being slowed down and captured on the walls around me, as though the content of my brain is lightly hugging me.

Appropriating a studio space as my own is crucial for my sanity. During the first few days of the residency I started a small investigation into the studio spaces of the other resident artists. It was exciting to see each individual formulate their workspace in their own style. My own ideal ‘two-week-working-space’ needed a mascot of some sort, sooner rather than later. I promised myself to make, find, steal or collect one object a day, for a week. It led to a small altar.

A mascot a day keeps the doctor away, Robin de Vogel, 2013

As the days progressed I began to realise the vast significance a project like Caribbean Linked II carries within the development of Caribbean art today. The project is not only about establishing a direct link between ten young Caribbean artists during their time in Aruba, but it forms a direct bridge between the islands, a bridge where only creative-exchange is accepted as toll fare. Upon asking curator Holly Bynoe why she believes in this project so very much she answered: “We are planting seeds”.

The work I made during the residency spoke about our ‘reach’ as a human being. Our reach can be categorized as something tangible and measurable like a radius or a circumference, but at the same time our reach can be something elusive and invisible. An opinion exchanged about a work in progress can lead to a complete overhaul in someone’s point of view. Hence the reach of that particular dialogue is immeasurable and untold, as is the importance of the seeds planted during Caribbean Linked II. The elements I take home with me from the continuous exchange that took place during those two weeks are undeniable. I have become aware of a much broader range of artistic possibilities within the Caribbean, various residency programs, projects and creative institutes that I am extremely excited about. Getting to know these beautiful human beings from all over the Caribbean and sharing my island with them makes the oceanic barrier feel so much smaller. Ultimately it leads to an amplified sense of connectivity amongst the different islands as well as an increased feeling of personal responsibility to promote and unite in our diversity. 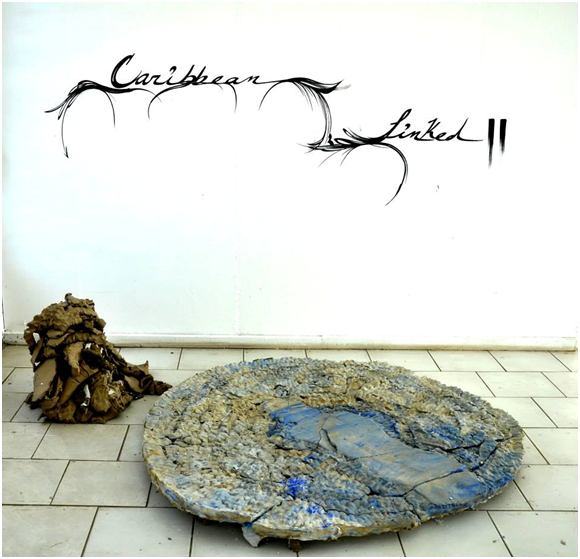 Image by the artist

Robin de Vogel is a Dutch artist raised on the island of Aruba. She participated in photography, drawing, painting and installation art workshops provided by Ateliers ’89. In 2008, she moved back to The Netherlands to pursue a Bachelor of Fine Arts Degree from the Ceramics Department at the Gerrit Rietveld Academy in Amsterdam. She also engages in various collaborative projects and exhibitions in Europe and the Caribbean. Robin’s work often takes the form of installations that revolve around the sensibility of the viewer. Her pieces aim to serve as a subtle disruption of the daily routine. Currently, Robin is completing her exam year and is preparing to pursue a Master of Fine Arts Degree after the summer.